Am I able to ask questions about retro computing yet?

It seems that this part of the stack exchange still isn't fit for purpose. 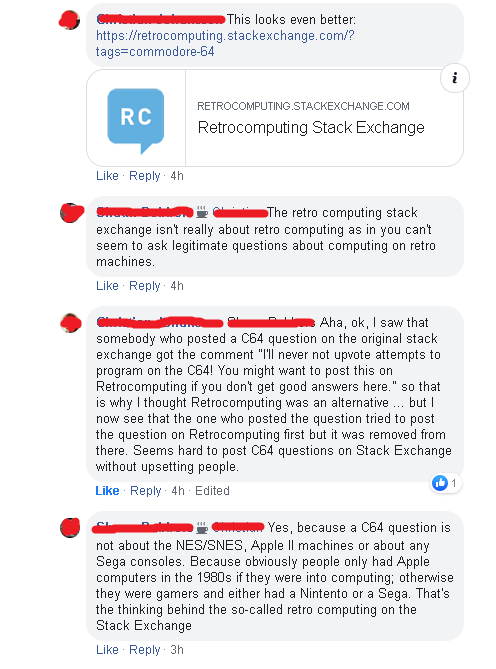 Okay so there may be an exaggeration somewhere in there, but I think there is still a lot of truth in there.

It could well be that the Retrocomputing SE has failed to be "fit for purpose" at times, but you provide no real evidence of this here. Without links to specific questions where we can determine what went wrong (or right) in the close vote process, all we know is that a question ostensibly on the topic of retrocomputing got closed. But since we expect in every SE that we will occasionally get poor quality questions that should be closed, "some questions were closed" is in no way evidence that any particular SE is not working well.

From my own search for evidence on whether here one "[can] access legitimate questions about computing on retro machines" and whether or not it "[s]eems hard to post C64 questions on Stack Exchange without upsetting people," I offer the following heavily-upvoted questions directly pertaining to programming* on the C64. The figures in parentheses are the upvotes and downvotes for each.

All of these questions have received good answers (>10 upvotes) and all but one have received multiple answers. I would suggest reading through them to help get a sense of how to ask a good question, if you feel your or other questions are getting closed unfairly. In particular, pay attention to how they, in SE style, can elicit reasonably specific, non-opinion answers.

And of course if you don't understand why particular questions are (or are not) being closed, feel free to post links to those, along with your arguments about what's wrong, as further questions to this meta.

*I chose "programming" here because your question mentions "somebody who posted a C64 question on the original stack exchange," presumably SO, where people would be posting programming questions, and "upvote attempts to program on the C64" again indicating that the topic was programming in particular. Retrocomputing also covers non-programming use of old systems, and there are plenty of good questions about the C64 in that area as well, though the non-programming area does, unsurprisingly, have a slightly higher incidence of poor questions.

As to your question:

Am I able to ask questions about retro computing yet?

Yes, you are able, feel free.

Not the answer you're looking for? Browse other questions tagged discussion .

This site is for discussion about Retrocomputing Stack Exchange. You must have an account there to participate.

14
Retrocomputing - Will the site survive?
7
Is repair/maintenance/upgrading of pinball machines on-topic?
10
Computing History SE
4
Are questions asking for modern hardware to interface with old hardware on topic?
4
Is PATA considered retro?
6
Homework Questions on RC
6
Are list questions OK again?
2
Should we have retro-coding questions on Retrocomputing?
6
Is a new “retro” design in scope of this group?
2
What is off-topic about this HxC Floppy Emulator question? Can it be made on-topic?