Just wanted to call out the fact that our Area51 stats are moving in the right direction, with only our question rate remaining the sticky part: 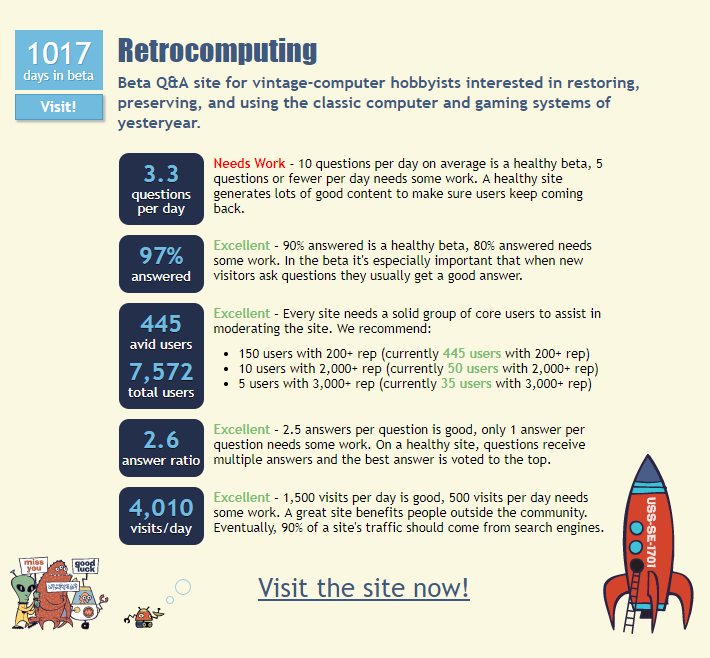 What I find particularly interesting about this site is all of it! By that I mean even though I only tinker with a few retro computers, I'm often falling down rabbit holes learning about other machines I've never even seen let alone touched.

Getting an audience was always going to be a slow burner for this site due to th sheer number of established forums, but something I find particularly interesting here is that we often get questions and answers with high numbers of votes (at least compared to another SE site I moderate). Keep up the great work everyone, and keep sharing such amazing knowledge!

Well, the site is running pretty smooth. But still, we are notr an established scholar area as historians, despite the drive to keep it on a professional level, nor are we some super nerdy stuff (just check the bible section on SE). And while retro is mainstream, dealing with old computers in a serious way isn't. So we may stay between the leagues for quite some time to come.

Even more so as any community (like retro) has many users, but only a few tinkerers - and only these dig deep enough into the issue to end up with question that google's first entry won't answer.

Or is there a way to tweak SE rules?

After all, we excel (as shown) greatly on 4 of 5 points, so maybe there's room?

(Since this is Meta, now for wizzwizz4's answer)

While I really appreciate your enthusiasm to push the site, artificial growth has never helped any project. Not in war and not in business - nor in cosmetic surgery - deflation did always hit soon. It seams to me as if you're trying a bit too hard.

On the management side, splitting questions is only a good idea when really unrelated issues are tackled. In the question mentioned the OP didn't ask to answers each and every point (as many did), but rather a timeline of development (which again may be rather broad in itself). The points given are clearly meant as examples to build that timeline along. So it never was about them in the first place, and while I agree, that each (or at least most) of them would also qualify as questions of their own (some have already been asked), the question as it was asked is not one to be split.

I also feel this related to some overreaction on other topics - which do ironically seams counteracting your intention to promote the site. For example the two quite different questions about the history about diskettes, where one got arbitrary marked as duplicate, despite that there is none - or at least not more as if the site would allow two independent questions asked about the C64 (wich it des if I remember correctly).

Quite related the handling of an actual and genuine new question like this about the workings of Zuse's FP implementation. It would be quite appropriate to give members a chance to answer it - and eventually improve the question as well. Just cancelling it isn't helping in any way.

I'm even more so confused when reading the reasoning provided: "@Raffzahn There's not even a question mark in the body, and the title isn't a question either." Serious? A missing question mark? If that's a main reason to close a serious question, then moderation can be replaced by a single line PERL expression - isn't it?

Questions can be held in many ways. AFAIK you are English, right? Your people are known to put questions in a way no normal being not grown up in this language will even start to detect. Aren't they? Shouldn't that result in a certain sense to extract what's asked when others do alike? Not least the name of the OP should have told that he may be from a wider audience than just 'Upper-Left-West-Berkshire'. What about helping such posters instead of canceling 'em out?

And then there is the notion encouraging people to ask questions to the purpose of hunting down badges. While I agree that gamification is a nice idea and for great icing on the cake, turning the on top is missing the whole idea. We already have many, ... lets say, less than genuine ... questions asked. If questions that can be answered by entering the title line into Google and clicking one of the first links (usually Wiki) are realy a goal for the site, then we should pool a few quid and hire click-workers to turn wiki headlines into questions.

I can't see pushing this even further, playing a game against Area51 rules, is anything desirable for RC.SE. I mean, what good is it if we plunge back after such an artificial peak, filling the site with not really great knowledge, turning away future members by superfluous content?

We should at all means try to keep quality our main goal.

After all, we can stay the next decade in Beta and wouldn't miss anything relevant - no, changing the background colour or having an icon of our own isn't adding anything - it's eye candy without value to content or the site at all.

(Having said that, there is one, and only one helpful feature that comes by leaving Beta (as I understand): The ability to have several other SE sites listed on the 'close and move to other site' selector when voting for closing a question. Much helpful, still not worth flooding the site with low quality to get it.)

Personally I could crank out several questions a day, including some where I assume an answer will not be given by many, but to me this is faking as I already know the answer :)) So far there are only a few questions I couldn't find a satisfying answer myself by investing a few minutes in googling and browsing the results. Nop, I'm not moving onto the Dark Side.

We're up to 3.3‽ This is amazing! We've been consistently sitting around 1.9 for ages, and now it's picking up!

We've recently had a really broad question asked that should be split into 10 different questions (including duplicates; I haven't checked), which might spawn two or three more questions between them. That could add about 1.2 to the counter.

You, the reader, trying to get the • Inquisitive badge, but only if you've got good questions, is probably the easiest way to get our questions-per-day up. If only 10 people do this, and we get some more answerers to keep our answered percentage up, we'll be graduating in no time!

Questions per day (QPD) looks like it's about to become irrelevant. A brief summary for those who don't want to wade through it all:

What does this mean for Retrocomputing? Keep doing what we're doing, maintain our quality levels, and don't worry any longer about QPD, except to the extent that's in line with standard site promotion for its own sake anyway.

Not the answer you're looking for? Browse other questions tagged discussion .

This site is for discussion about Retrocomputing Stack Exchange. You must have an account there to participate.

8
We're dropping to ~1 question per day
5
How should we promote our site?