Connect and share knowledge within a single location that is structured and easy to search.

How to deal with spam

This isn’t a question as such, but a public service announcement.

From time to time, the main site gets posts (both questions and answers) which are obviously spam — they are blatant attempts to get visitors to go to a site the spammer presumably cares about. On Retro.SE, such posts inevitably attract a number of reactions, including downvotes, comments, and votes to close.

What should be done about such posts?

There is only one correct way of dealing with spam on SE, and that is to flag the post as spam, and only that (in particular, do not downvote it): 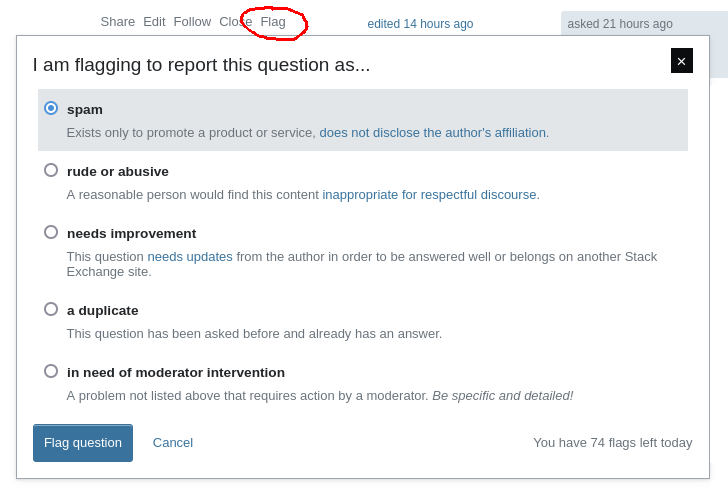 Flagging a post in this manner doesn’t necessarily end up adding work for the site’s moderators: once six such flags are raised, the post will automatically be deleted.

Every single spam flag also results in a downvote (and in the case of answers, this doesn’t cost the flagger any reputation). Additional downvotes are not helpful, in fact they can help spam survive longer by removing it from the front page.

Additionally, if you see a spam post that hasn’t been deleted some time after it was posted (say, ten minutes), that means it hasn’t been detected by SmokeDetector. Such posts should be reported to Charcoal HQ, ideally before they are deleted; doing so allows the people involved with Charcoal to adapt the detections such that future instances of similar spam are detected and reported, which tends to result in the spam more rapidly accumulating spam flags and, thus, being deleted faster.

Not the answer you're looking for? Browse other questions tagged support faq moderation flagging .

Welcome!
This site is for discussion about Retrocomputing Stack Exchange. You must have an account there to participate.
Help

1
How do I remove myself from Retrocomputing @ StackExchange?
0
How do you log-out of retrocomputing ?, and, there are problems with the text-editor for writing questions?
17
What's up with the emulation questions lately?
4
Elaborate clarifications lost with chat room deletion
3
Yikes! How did I earn 300 reputation yesterday if a user can only earn 200 reputation a day?
5
Typing ALGOL code correctly – how to?